The 7 Best Bars in Alaska! 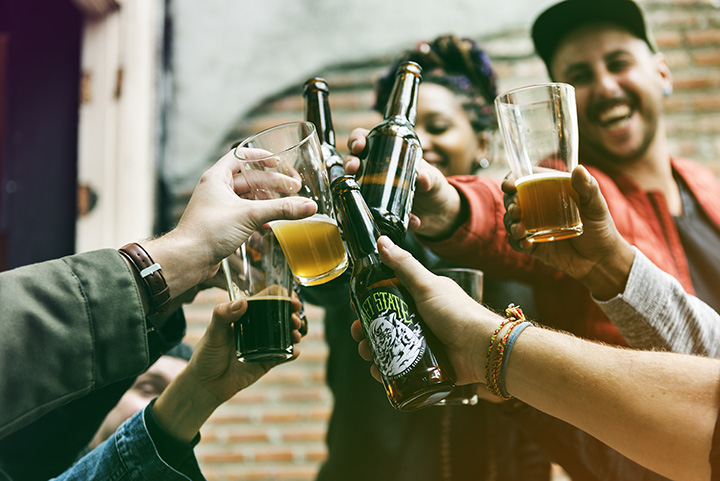 The Last Frontier is known for its bars. Some are rowdy and rocking, some are housed in old bordellos, while others serve your drink in glass made of ice. Many of Alaska’s bars are unique, and plenty of them are worth an extended road trip to try out a few. Following are 7 of the Land of the Midnight Sun’s iconic bars.

The Arctic Bar has long been known as the second home to many commercial fishermen. It’s got deck seating looking out over the Tongass Narrows for those who like to watch the cruise ships, state ferries, fishing boats, private yachts, and small skiffs go by. Cruise ship passengers also love this bar for the Alaskana and the non-tourist trap ambiance and prices.

Beloved by locals and tourists alike, the Red Dog is a Juneau icon that dates back to the days of city’s frontier past as a rough mining town. Although the saloon has moved several times throughout the course of the years—its original incarnation was a tent on the beach—the Red Dog’s spirit and ambiance remain true its roots. Now owned by a group of Juneau residents, the Red Dog is now open year-round instead of just seasonally and still features old-style sawdust floors and swinging saloon doors.

Like most of Alaska’s great bars, the Salty Dog Saloon is a historical landmark. It started out as one of the first cabins built in Homer in 1897. In its first life, the cabin was the town post office. Over the years, it’s been a grocery store, a schoolhouse, a private home and an office for a mining operation. Located on Homer’s stunning waterfront, it’s the ideal spot for a saloon. Dollar bills left by customers both local and far flung cover the walls and ceilings.

Seward’s Yukon Bar is where locals and savvy travelers go to enjoy relatively inexpensive libations. They are also known for their live music four nights a week (during the summer months), open jams, karaoke, DJ dance parties, and trivia nights in the winter. You’ll get free Wi-Fi here and your dog is allowed to join you inside until 9 p.m.

Breaker’s Bar in Nome is another slice of Gold Rush history combined with classic Alaska hospitality. Photographs from the town’s days as a fledgling gold mining camp line the walls, many of them of the miles-long tent city that once lined the beach as thousands of gold seekers from across the globe found their way to Nome seeking their fortune.

Located on historic Main Street in the heart of Talkeetna, the Fairview Inn got its start as a hotel in the early 1920s following the installation of the Alaska Railroad. Listed on the National Register of Historic Places since 1982, the Fairview is loved by locals and visitors alike for its authenticity, warm hospitality, and cozy rustic ambiance. The Fairview has an international flavor during late winter and spring because mountain climbers come from all over the world to conquer Denali, and like everyone else who visits Talkeenta, they find their way to the Fairview.

The Peanut Farm is an Anchorage staple where sports lovers come to root for their favorite teams with like-minded others. At almost 60 years of age, the building is younger than those mentioned previously, but that doesn’t mean it’s lacking in quintessential Alaska character. Its 20,000-square-foot cabin-like interior features over 70 big screen TVs, so sports fans don’t have to worry they won’t be able to watch the event of their choice. With over 30 beers on tap, guests won’t have to worry about not being able to find something good to drink, either. The food is good classic pub grub and the portions are huge.

View more Alaska Bars and Saloons.
Select a Alaska town to find
the Best Things-To-Do and Places To Go around you