The 8 Best Doughnut Shops in Alaska! 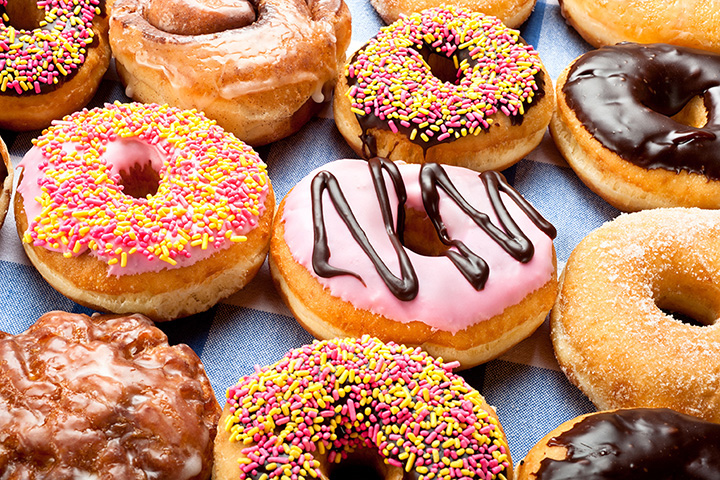 Coffee is the fuel that powers many Alaskans through the cold winters—and nothing pairs better with a hot cup o’ joe than a doughnut fresh from the fryer. Whether you’re in the mood for a plain old-fashioned perfect for dunking or a cream-filled bar that will leave you licking your fingers, these 8 spots are the place to go for your fried dough fix.

The Moose is Loose, Soldotna, AK

Make sure to schedule a pit stop at the Moose is Loose if you’re traveling down to the Kenai Peninsula. Before ordering, browse the extensive collection of Alaska kitsch before placing your order—you’ll need the time to decide between the maple iced or glazed dough boys (imagine the Pillsbury Doughboy after a dip in the deep fryer), apple fritters or the dessert-plate-sized chocolate glazed doughnut.

If the colorful moose marching along the Kobuk’s exterior walls don’t draw you in to this cozy shop, the scent of lightly spiced doughnuts, fresh brewed coffee and other homemade pastries surely will. Make sure to try the old-fashioned doughnut, named one of the country’s best.

There’s nothing old-fashioned about the doughnuts at Jason’s. Fruit and cheese-filled doughnuts, ganache dipped doughnuts, even a limoncello glazed doughnut—each bite of these doughnuts is an extravagance. Oh, and did we mention the shop is run out of a tent? Line up early, because they often sell out.

Dino’s Donuts isn’t for the indecisive. From flavored cake doughnuts to fruit and cream-filled specialty bars to “large fancies” like the mixed berry fritter, it would take weeks to sample all of Dino’s offerings. And kids will love the Minion, Sesame Street and Pokémon shaped doughnuts. Really can’t choose? Just order a dozen—they’ll throw in an extra for free.

In addition to the usual selection of frosted, cream-filled and specialty donuts, Golden Donuts does special order giant donut cakes for when a dozen just isn’t enough. Add in the fact that they’re open 24 hours a day and have a drive-thru, and you’re, well, golden.

What could be better than doughnuts and coffee? How about seasonal-shaped doughnuts, like the spring flower doughnut, piped and decorated to resemble—what else?—a flower, or the maple pershing, similar to a cinnamon roll but made with doughnut batter and slathered in a maple glaze.

Chocolate frosted, heart-shaped doughnuts for Valentine’s Day, glazed doughnuts dotted with M&Ms (while they last), and maple bacon doughnuts make the Donut King the place to grab breakfast-to-go before setting off on adventure in Alaska’s Mat-Su Valley.

With two locations in Juneau and one across the bridge on Douglas Island, this convenience store offers an assortment of fresh baked doughnuts daily.