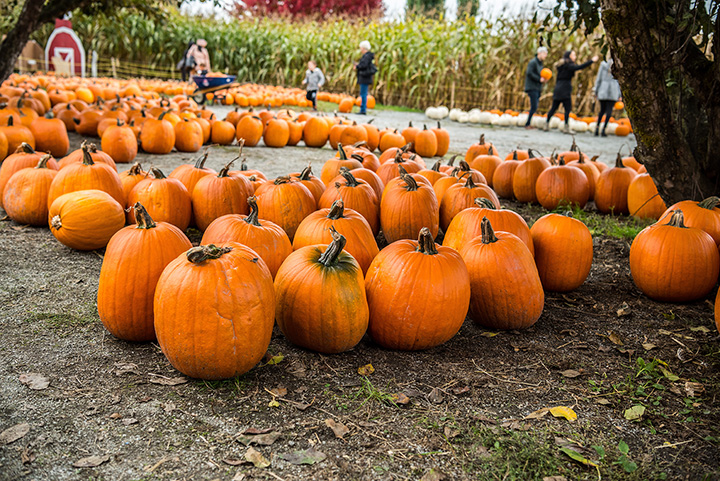 It's decorative gourd season and everyone's flocking out into the crisp air to pick pumpkins in beautiful patches under snowy mountains.

It goes that Halloween, according to the History Channel, comes from Stingy Jack, a man who was so tricky that he forced the devil not to claim his soul, and so unsavory that he was denied from heaven. So, as can happen, his spirit was left on earth to wander with only a dimly lit coal lamp to guide his way. And as one does, he put his lamp inside a carved-out turnip because nothing frightens small children more than a fresh turnip!

So if you're in Alaska this season and need a decorative gourd of your own to ward off any wandering turnip-wielding spirits, or you just have the passion for organic art, here are the best places in Alaska to pick out fresh pumpkins from the patch.

The Williams Reindeer Farm does exactly what you think: they raise reindeer outside of Anchorage and run family-friendly tours through the month of October! With everything from pumpkin-picking and hay rides to a petting zoo with reindeer, elk, bison, bunnies and chickens, it's a fantastic fall family outing. They even have a hay maze for the kiddos!

Pyrah's Pioneer Peak Farm is Alaska's largest U-Pick Farm (meaning you come and pick the fresh veggies yourself, any time in the season!), and they love fall. Every year they host a large festival celebrating the harvest with hay rides, a maze, fresh veggies, food vendors, face painting and so much more. There's no better place to get your fresh Alaska produce with a stunning view of the biggest local mountain, Pioneer Peak. Get some veggie inspiration from the passionate farmers and cooks, and pick the biggest pumpkins you can find in the state.

This greenhouse-bashed farm inside the Arctic Circle is the only place to find great home-grown gourds around interior Alaska. And for over 45 years, Ann Dolney's operation has been the local spot for flowers, produce and assorted plants in Fairbanks. Her yield varies based on the late-season weather patterns, but no matter what you're guaranteed a good time wandering the grounds and witnessing the extensive produce production. And Ann's always good for some expert home-gardening advice!