The 9 Best Skate Parks in Alaska! 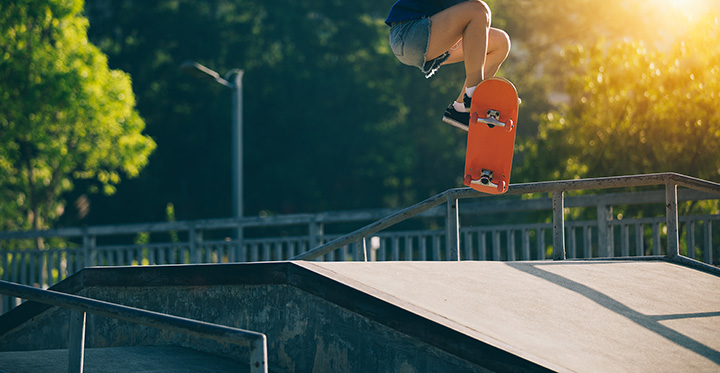 The skateboarding community is among the very strongest in Alaska. Dropping, shredding and riding some of the craziest things this side of the continental divide, these guys are serious. They’re serious about getting involved with their local politics, and Alaska municipalities are listening, with several new skate parks opening every year around the state. Without further ado, pack your bags and don’t forget your board, because here are the 9 best skate parks in the Last Frontier.

What capitol is complete without a skate park? And the Juneau park is no afterthought. It’s a 7,500 square-foot facility for boarding, scooting and in-line skating, with everything from rails to a full half pipe. Skate under the shadow of giants, and soak up all the sun you could ask for.

If hiking Alyeska already has your thighs feeling like jelly, or you’re looking for a great break on your way down the Kenai Peninsula, be sure to hit the Girdwood Skate Park. The transitions are seamless, the quarter pipes come in four to eight-foot heights, and the convenience store right across the street is a perfect refuel.

This is the best, albeit only, skate park in the Fairbanks area. So good thing it’s a solid one! A wall ride, a quarter pipe, pyramid and double metal-edged curb to ride makes this spot a great park that delivers everything a skater could ask out of a good ride.

By far the epicenter of skating in Alaska, as it is for almost everything else, this is one of many free skate parks in Alaska’s most populated city. You can skate until your plastic burns away on the quarter pipe, unbox and kinked rail for transfer tricks. Get it while you’re here, it’s one of the best.

For the Air Force member looking to learn to ride, or the seasoned vet needing his daily fix, this indoor park on the Elmendorf Air Force Base offers year-round skating for the men in uniform. And if you’re into community service, the wood ramps could always use some brushing up.

Perhaps the largest skate park in the state, and one of only two fully concrete parks in the last frontier, this is worth the drive out of town if you’re staying in Anchorage for any amount of time. And if you happen to be here until the late fall, local skaters constantly keep the park clean of creeping ice. There’s that Alaskan resilience at work!

Two metal half pipes (one six-foot and one eight-foot) connected by a spine makes the best daily getaway anyone could ask for when the parents go on a historic tour. Skate your heart out and shred until your wheels fall off in the biggest skate park in the southeast.

Seemingly growing every summer, this park now boasts quarter pipes at both ends with a rail and ramp in the middle for the best variety of skating for the cruise ship kids and locals coming through the Resurrection Bay. Kick it at the park and feast on some of the best fresh seafood available anywhere in the world, with world class wildlife and landscape views to boast.

Sporting the raddest design, with a full bowl and 3,000 feet of boxes, half pipes and drops, this park may not be the biggest, but it’s perhaps the best skating in the state as of this year.

View more Alaska Skateparks.
Select a Alaska town to find
the Best Things-To-Do and Places To Go around you