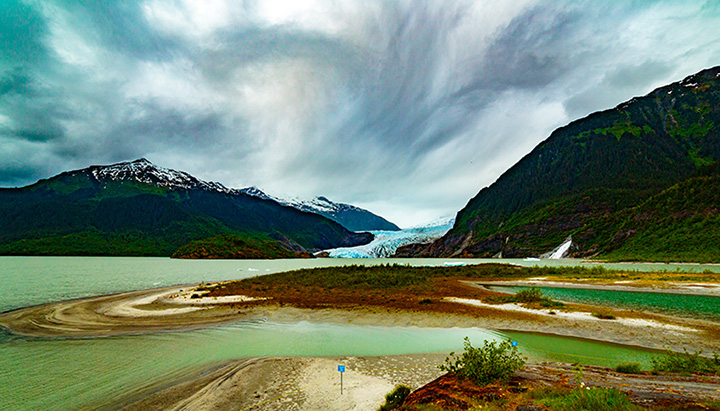 From rainforest to polar tundra, from grasslands to glaciers and the largest mountains in North America, Alaska will never cease to impress a hardy visitor. And through gold rushes, world war, and an exploding oil industry, Alaska contains a storied history. Here are 14 fascinating facts about everything from climate to wartime occupation in Alaska.

Alaska is one of the few places on earth that can boast to contain all seven major climate zone types. High alpine in the state’s massive granite mountain ranges, tundra on the North Slopes, Fairbanks and interior Alaska, rainforest covering the southern coastline.

2. Largest glacier in the Western Hemisphere

The Bagley Ice Field, a massive sheet of ice found in south-central Alaska measuring 127 miles long, six miles wide, and 3,000 feet thick is the largest non-polar ice field to be found in the Western Hemisphere.

Denali, at 20,310 feet, is the only peak above 6,000 meters in North America. The next highest mountain is Mount Logan in the Yukon Territory of Canada at 19,551 feet. And 17 of the highest mountains on the continent are found in Alaska, including Mount Hunter, Mount Foraker, and Mount Hayes.

This state has the largest gap dependent upon fish, which is second only to oil revenue. In fact, the majority of America’s crab, salmon, halibut and herring come from Alaska, and yet fishing, as a resource, is still labeled as “underutilized” according to Wikipedia.

5. The northernmost city in America

Barrow stretches as far into the arctic sea as is imaginable, boasting frigid temperatures in the winter (the average low is -14 degrees Fahrenheit), with summer temps that rarely rise higher than 40 degrees.

On Oct. 18, 1867, for two cents per acre (or $7,200,000 total), in a move known as “Seward’s Folly,” U.S. Secretary of State William H. Seward purchased the land that we now know as Alaska. He was thought to be a loon for spending so much on a state with so little development, but Alaska turned out to be the best investment he could have made, with countless mineral resources available, and an immeasurably beautiful landscape.

You might know that Alaska is famous for a few things, and probably chief among them is the oil industry. In fact, they have historically accounted for 25 percent of the oil production in the United States, though that has fallen off in recent years with the development of fracking and shale drilling in the Dakotas. The reserves here are thought to be the largest in North America, though much of it is protected by Forest Service land.

They don’t call it the Land of the Midnight Sun for no reason. Since nearly one-third of Alaska lies within the Arctic Circle, much of the state does not see nighttime at all for 80 days of the year, and then, starting November 18-19, many will not see the sun again until late January.

The largest highway in Alaska, aptly named “The Alaska Highway,” was originally built as a military supply road during World War II. Much of the infrastructure in this state is due to military development, and much of the rest began as Spartan development for the budding oil industry.

Alaska is more than twice the size of Texas, making it the biggest state by a long shot. It is more than 1,400 miles from north to south, and measures a staggering 2,700 miles wide, which means if you impose an image of Alaska over the entire Continental United States, Alaska would stretch from the east coast to the West.

The longest continuous coastline in the United states also happens to be in Alaska, where we have over 6,600 miles of it. That’s a lot of area for fishing, and a huge chore for the biologists and policy makers who have made it their mission to keep it healthy.

The Tongass National Forest, stretching from just south of Anchorage all the way to the southern tip Alaska and British Columbia, is the largest protected forest area in the United States at over 17 million acres. This forest is mostly temperate rainforest, and is an extremely valuable ecosystem resource.

If you want to get away from it all without leaving the United States, Alaska is the place to do it. A large percentage of our population lives on homestead ranches or in small, widespread villages. To give you an idea, the entire state population of Alaska is smaller than the Seattle metro area.

14. Both the easternmost and westernmost state

Everyone knows that Alaska is the westernmost state in the United States, but did you know that it’s also the easternmost state? Alaska’s Aleutian islands extend so far into the Pacific Ocean that they breach the eastern hemisphere, making Alaska the only state that occupies both hemispheres at the same time.