The Perfect Fourth of July in Alaska 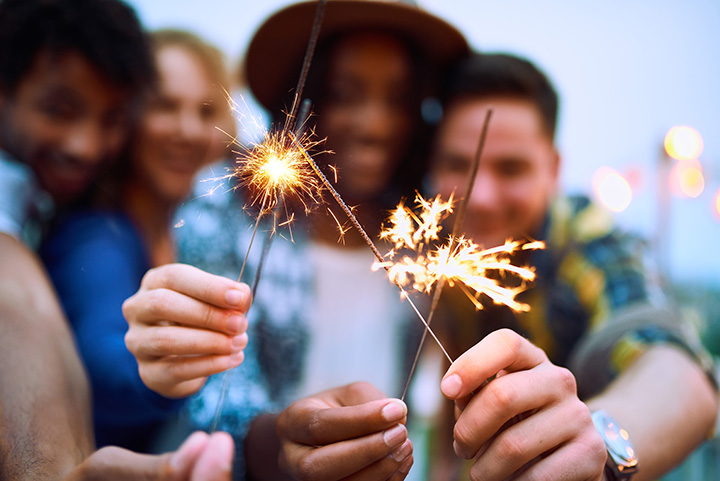 Alaskans love a good festival, and what better time to celebrate than the Fourth of July? From parades and midnight fireworks, to foot races and hero games, these are the best places for a perfect Alaskan Fourth of July in 2019.

Seward’s Mount Marathon Race is the stuff of legends, supposedly starting as a bet over whether the mountain’s 3,022-foot elevation could be conquered in less than an hour. The reality—it began in 1915 as the country’s second oldest organized race. The mad scramble up and down the mountain is a thrill, drawing hundreds of runners and thousands of spectators from around the world each year. While the race is the main attraction, don’t miss the midnight firework display and parade through the streets of this picturesque seaside town!

More than 25,000 visitors converge in Alaska’s largest city for a jam-packed day of fun downtown Anchorage. Grab a curb-side seat for the community and veteran’s parade at 11 a.m., then walk over to the Delaney Park Strip for a bite to eat at one of the dozens of food vendors (be sure to try a reindeer dog), hop on some carnival rides and listen to live music.

Spend your morning fishing and be back in time for Fourth of July fun in Homer, “The Halibut Fishing Capital of the World.” The annual parade begins at 6 p.m., with awards handed out for a variety of “Best of” categories, including Best Use of Theme, Best Children’s Group and Best with Animals.

Enjoy an old-time, small-town Fourth of July in the Southeast town of Haines, Alaska. The 1.5-mile Mt. Ripinsky run will whet your appetite for the watermelon feed, pie-eating contest and community barbecue, and provide stunning views of the Chilkat River Valley. The Main Street parade, mud volleyball game, and music festival culminate in the fireworks display at the Fort Seward Parade grounds.

Alaska’s capital city celebration begins on July 3 with a spectacular firework display over Gastineau Channel starting at 11:59 p.m.—it’s too bright to start any earlier. The next day, watch the parade wind its way through the historic streets of downtown Juneau before heading over the bridge into neighboring Douglas Island.

It may be directly across the Gastineau Channel from Juneau, but the tiny island community of Douglas holds an Independence Day celebration all its own, beginning with the annual Soapbox Derby and Community Picnic on July 3. After an afternoon parade down Douglas’ main highway—bring a bag to hold the candy parade participants toss to the crowds—stick around for food vendors, field events, and live music at Sandy Beach.

For a city its size—estimated population, 4,000—the Valdez 4th of July Festival packs a big punch. Start the with a 5 or 10K race, or let the kids jazz up their bikes for the Kids’ Decorated Bike Parade. The celebration ends with everybody’s favorite summer camp treat, s’mores, around a community bonfire.

More than 3,000 people pour into Wasilla for a community parade and picnic that stretches from morning to night. The fun starts at 11 a.m. with a parade through downtown Wasilla, followed by hot dogs and refreshments at the mayor’s picnic. Throughout the afternoon enjoy live music, a hot dog eating contest, and games and activities before enjoying the fireworks explosion at 11 p.m.

If you’re already counting down until Christmas, get your holiday fix at the North Pole 4th of July event. Just 15 minutes south of Fairbanks, the festival includes a pancake breakfast at the Santa Senior Center, a parade down Santa Claus Lane, and an appearance by Old St. Nick, of course.

Kids and adults alike will find plenty to keep themselves busy at Kenai’s July 4 celebration. After the parade, adults can relax in the beer garden while kids spin themselves silly on carnival rides and gorge on fair food. Local vendors, a cosplay costume contest and kids’ bicycle giveaway round out the festivities.

View more Alaska July 4th Fireworks and Celebrations.
Select a Alaska town to find
the Best Things-To-Do and Places To Go around you